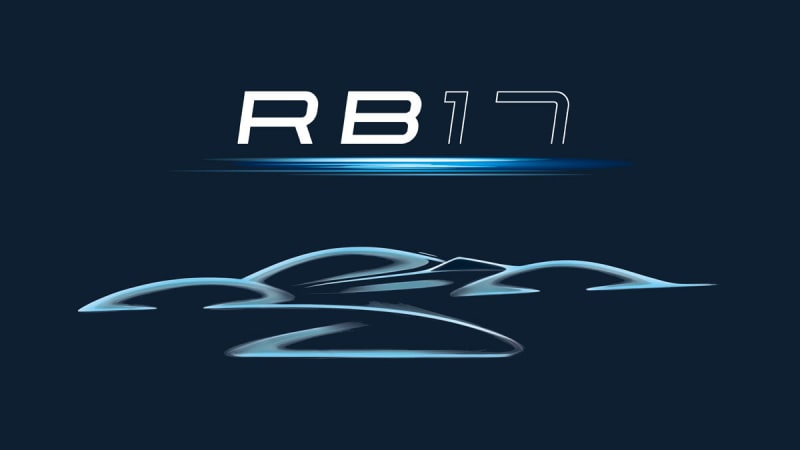 Following the Mercedes-AMG Project One and the Delage D12, the burgeoning era of Formula 1 cars for the street has another entrant. Red Bull Advanced Technologies (RBAT) and head designer for the Oracle Red Bull Racing F1 team Adrian Newey have decided to pick up where they left off with the Aston Martin Valkyrie, announcing the Red Bull RB17. A summary of the design philosophy is: “All the tricks we’ve learned in F1,” “Adrian’s greatest hits,” a combination of the “performance-enhancing technologies that have subsequently been banned in F1.” That means carbon tub, active suspension, side skirts, ground effects tunnels, blown diffuser, hybrid energy recovery system, and around 1,250 horsepower — everything but the fan, really. It also means a limited production run at an F1 price: 50 examples costing £5,000,000 each ($6.1M U.S.).

Here’s the background. In 2016, when Aston Martin was the primary sponsor of the Red Bull F1 team, both parties announced development of the AM-RB 001, which would become the almost-no-holds-barred Valkyrie road car and no-holds-barred Valkyrie AMR Pro track car. In 2020, two years after the Valkyrie was meant to be delivered to customers, Lawrence Stroll’s takeover of Aston Martin had the carmaker cozying up to new partner Mercedes on the road and the track, securing Mercedes engines for passenger cars and the Aston Martin F1 team. Aston Martin and Red Bull separated in the F1 paddock, and although both said they were committed to finishing the Valkyrie, eventually Aston Martin took charge of completing the project.

Six months before the first Valkyries were delivered to customers at the end of last year, Newey was already saying of RBAT, “Yes, absolutely, we would like to do another vehicle. Exactly what that is and what it’s targeted at is subject to debate.” While it could be that the Valkyrie AMR Pro didn’t go as far as Newey wanted, it’s definitely true that the eight-year-old technology arm RBAT was looking for more commercial outlets for its knowledge. Red Bull team principal and CEO Christian Horner said that with the sport’s current budget cap, “If you want to retain resources, there have to be projects that can justify their existence.”

Enter the RB17 to fill all the gaps. The name is a bit of inside baseball; when F1 made rule changes to save money in 2020 during the pandemic, teams used mainly carryover chassis’ in 2021. Red Bull’s naming convention began in 2005 with the RB1, representing the constructor’s first year in the sport. The team’s 2020 car was the RB16, this year’s car is the RB18, the 2021 car should have been the RB17. But because the 2021 car was so similar to the 2020 car, RB called it the RB16B. That left RB17 lurking in limbo like the 13th floor. Here is the alphanumeric’s escape hatch from the ghost world.

All we have are snippets for the moment about a track car said to be in “advanced stages” and due in 2025. Power will come from a twin-turbo V8 of undisclosed displacement, working with that mild hybrid system to develop 1,250 hp. Both are expected to be built by an unnamed third party to RBAT’s specs. This is speculation, but F1’s rumormill has Porsche already paired with Red Bull come 2026, and Porsche is coincidentally running a hybrid twin-turbo V8 in its 963 LMDh car. Newey said the hybrid system won’t just be about filling in the ICE power troughs, as the energy recovery system “also helps in other areas, which I don’t really want to go into at the moment.” Almost everything else about the car will be developed and built in-house at a rate of 15 RB17s per year, meaning a production run of more than four years. The purchase price — which is an estimate, by the way — will also pay for service and maintenance, access to Red Bull simulators, and on-track instruction.

Newey said the only limits will be physics, the need to use standardized tires, and the need to fit two people, “at least one being quite tall.” Otherwise, “it’s effectively a no-rules car” that worships the god of lap times, “which is ultimately all that counts.”

Oh, well, there is one other thing that counts, as Horner said: “It will sound fantastic, like a track car should.”