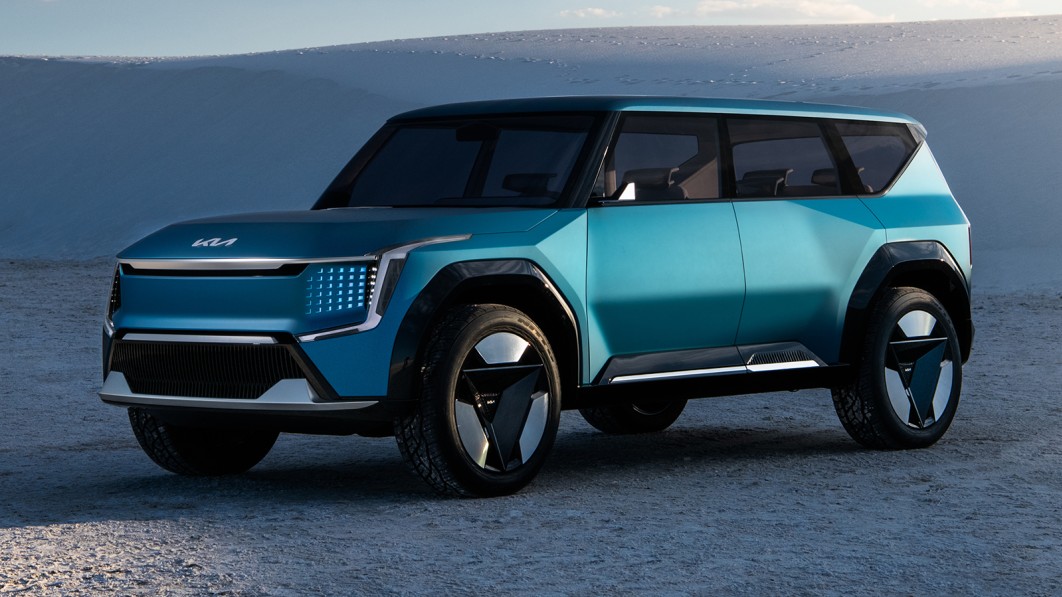 LOS ANGELES — The Hyundai Seven counterpart isn’t the only big, bold electric SUV at L.A. this year. Kia has its own take, and it’s a modernized version of the traditional boxy utility vehicle called the Concept EV9. It also previews one of the next production electric cars for the brand, which should look right at home next to things like the Telluride.

This sizable canvas is a classic two-box shape with many crisp, faceted body panels. The nose is mostly devoid of grilles, and to make up for that, it has a smattering of little running lights coming off the main, vertical headlight units. The flat hood has a sort of air extracting vent, and tucked inside are solar panels to provide a little bit of charging to the batteries. Up on the top of the SUV are power retractable roof rails so that you can choose between more carrying capacity or better aerodynamics. At the back are slender taillights that rise into the D-pillars, which also have a triangular shape reminiscent of the Soul. We also have to mention the wild 22-inch machined wheels with huge triangles.

The interior is spacious and airy thanks to the enormous wheelbase and large windows all around. The design is an evolution of today’s interiors with instruments and infotainment displayed on a 27-inch screen floating above the dash. It features many green materials such as upholstery made from recycled plastic bottles and wool fibers, flooring made from fishing nets and “vegan leather,” which this author humbly thinks should continue to be called “leatherette,” or perhaps just “faux leather.” Kia also added some reconfigurability to the cabin. The regular, forward-facing layout is called Active Mode, which is used for driving. Pause Mode flips the front seats around to face the third row, while the second row folds into a table. Enjoy Mode turns all three rows to the rear so that occupants can take in the view through the open hatch. Somehow we doubt that the view is worth it for the second and first rows in this setting, but it’s probably great for the third row and could be ideal for tailgating.

Being a concept, there aren’t deep details about the EV9’s powertrain. All Kia said was that it uses the same E-GMP platform as the EV6 and various models from Hyundai and Genesis. It will have a range of up to 300 miles, and it will support up to 350-kW DC fast charging. Presumably, it will also be able to power other accessories like EV6, and will surely be available with dual motors with all-wheel drive. An exact time frame for the production model was not announced.