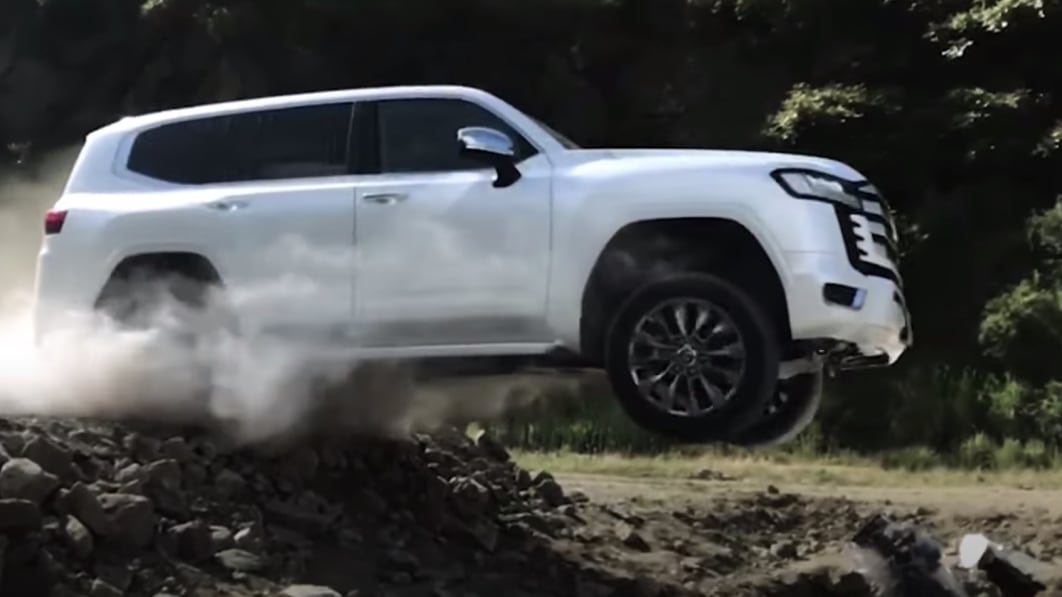 We’ve seen the 2022 Land Cruiser in its shiny debut best, we’ve seen its design evolution and its prodigious on-board tech, we’ve even seen it destroyed in an accident. The only aspect we haven’t seen in detail yet is its raison d’être, its ability to traverse terrain that would tear most cars apart. Luckily, Toyota has a dedicated Land Cruiser YouTube channel that shows the 300-series getting both dirty and airborne as it goes off road.

Here’s a video of the new Cruiser taking a muddy splash in an off-road park. It has no problem navigating water, sand, rocks, moguls, or clawing its way up a rain-soaked muddy hill. This one’s more of a produced film, but there are others that look more like data gathering test footage.

Here, you can see the difference between a 300-series equipped with e-KDSS and a 200-series without it. The system can electronically lock the front and rear stabilizers for on-road and turning stability, or disengage them for maximum articulation and ground contact. Interior camera angles show just how much less occupants are jostled around when the vehicle is e-KDSS equipped. We also get to see the 300 in dark red for the first time.

Other videos show tech like the Multi-terrain Monitor in action. It’s a bird’s eye camera that’s  typically used for parking repurposed for off-road situations where you don’t have a spotter. As a bonus, it overlays the wheel position over what the cameras see, so you can see where each corner of the car is going.

Yet another video shows how the Turn Assist function uses a brake to drags the inside rear wheel when making a tight turn. This should come in hand when threading a tight trail in a rig as large as the 300.

Another video features cool name haver Akira Miura use all these features through the off-road park from the first video. Miura is Toyota‘s factory driver for the Dakar Rally and has several runs and one class championship under his belt in previous generation Land Cruisers. Although this video is in Japanese, it still gives a good idea of how these functions work. We also learn that the Land Cruiser can safely ford a water depth of 27.5 inches.

Notably, the Crawl Control is much quieter than it has been in other Toyota vehicles like the previous generation Land Cruiser and the Lexus GX. The system uses brake pulsing to prevent slippage on sharp descents and slick surfaces. That used to be accompanied with a jarring, jackhammer-esque soundtrack, but here it’s much more subdued.

If you just want to see the Land Cruiser doing stunts, we can see what residents of Japan see on TV to advertise the new truck. It’s a good ad, in that it features plenty of action.

Of course, the YouTube channel shows some behind the scenes action from the making of the commercial. There’s plenty of sand doughnut action and we can see the Land Cruiser catch some air for the ad’s big climactic jump.

We won’t be getting the 300-series Land Cruiser in the U.S., though there are rumors of a Lexus variant coming. For now, we’ll have to tune into videos like these to see what we’re missing out on.